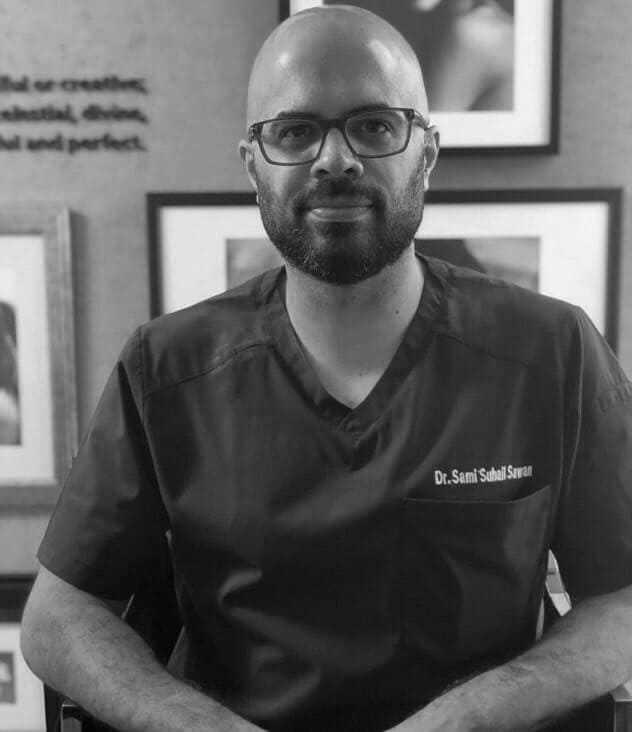 If you are looking for something natural and subtle that can light up your face, schedule your appointment today.
Book An Appointment

Dr. Sami Sawan is a graduate of the French board of dermatology, Paris, 2010. He was appointed as Head of Dermatology Section at the prestigious International Medical Center (IMC), Jeddah, Saudi Arabia. During this time he was also appointed as an official trainer for Teoxan and for Merz Aesthetics.
In 2015 Dr. Sami resigned from his position at the IMC and decided to dedicate more time to what he enjoys the most. So he opened Renew Cosmetic Clinics with Dr. Alaa Arif and Dr. Walid Ashkar where he is currently the Medical Director and sees his clients exclusively for injectable treatments.
During his career Dr. Sami has established himself as one of the top injectors in the kingdom. He has been a tutor and a role model for many physicians, a reference for complications, and has given more the 300 workshops on injectables.

In 2017 he decided with Dr. Alaa Arif to begin a new training concept for physicians interested in the field of injectables, they created the Injection Boot Camp, which is a congress dedicated to teaching correct and safe injection techniques.

With this idea they expanded the concept to include different parts of the Kingdom and the Gulf partnering with multiple international societies.

Fillers in their new form of Hyaluronic acid have been around for at least 15 years, they have proven to be very safe and reliable. Chemical modifications are introduced on theses fillers to make them even more safe and last longer. illers are divided according to their particle size and bonding between these molecules, and your doctor can choose the correct type of filler according to your prefrence, your needs, and the area to be injected. All modern fillers dissolve over time or in case of emergency or other instances they can be dissolved using a substance called hyaluronidase.

Botox is a very potent toxin that is diluted according to the indication and need. It is the new miracle drug, its was discovered by chance about 40 years ago, and now we are still discovering new uses for the drug, and apart from new uses we are modifying how we use it for cosmetic patients to give more natural results. It usually lasts from three to five months, with newer types coming soon into the Saudi market that will be more potent and last longer.

Dr. Sami as a Guest Speaker

Give us a call and book your appointment now.

Live Every Moment with Beauty